At least, not in the way that most people mean when they use the word. In all likelihood, you’re quite average. It’s a matter of simple statistics. Despite our penchant for picking up on individual differences, there’s not much that truly sets us apart as completely unique individuals.  Your story is one of the few things that will always be unique, but outside of that it’s much easier to identify similarities between people.

One consequence of our seemingly innate need to differentiate ourselves from others is revealed when you ask someone about their personality traits. I’ve found this to be particularly true of the introversion/extroversion spectrum. We can label that consequence in a number of ways (categorization, classification, taxonomy, typography, etc.), but it boils down to the simple act of creating conceptual and artificial dividing lines to separate things, where those boundaries don’t actually exist in reality. A good analogy would be borders and geography on a map: if I were to drive across Canada, I would cross  several provincial borders. When I cross the border between BC and Alberta, the only things that change are conceptual. There’s no physical line dividing the two provinces. As I drive from west to east, I’ll eventually notice that the geography has changed quite significantly from oceans and gentle coastal mountains, to the dramatic Rockies, to the rolling prairies. However, in any given half hour of driving, I can look out the window and see no significant geographical changes. When I actually change provinces, the ten kilometres before the border look the same as the ten kilometres after the border.

When it comes to personality, typology seems an intuitive fit. You can  do your Myers-Briggs test, get your corresponding personality type, and most likely feel affirmed by your result. The fact that a test could yield such surprisingly accurate information about the kind of person you are most likely makes you feel pretty special, and in some cases, might lead to significant insight. But, while there’s definite value in having insight about your own and others’ personality, our obsession with putting people into boxes can lead to unhelpful assumptions.

Introversion and extroversion are a great example of this. Susan Cain, author of the best-selling book,  “Quiet: The Power Of Introverts In A World That Can’t Stop Talking,” tells us that there’s roughly a 50/50 split between introversion and extroversion (I would also highly recommend checking out her book for an explanation of the often-misunderstood concept of introversion in general). Like borders on a map, it’s conceptually necessary to draw a line somewhere between these two personality traits in order to define them meaningfully. However, the two constructs are just poles on either end of a continuum, and there’s no exact place where you can say, “aha! I’ve crossed the line from introversion to extroversion!” In reality (and in keeping with a normal statistical distribution), most people fall in the mid-range of this continuum, and “pure” introverts and extroverts are actually very rare.

I’ve made a special drawing to illustrate what I mean here. 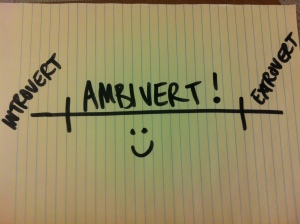 Ambiversion is not a formally recognized term in the same way that introversion and extroversion are, but it’s far more descriptive of most people’s personalities than categorizing as one or the other would be. My own Myers-Briggs results (INFP) paint me as a mild introvert – I’m only slightly more introverted than I am extroverted. So, labelling me as an introvert, while technically true according to the results of the assessment, would be somewhat misleading, as there are many ways and many circumstances in which I am actually more extroverted.

When it comes down to it, that’s the crux of the issue. Your personality is a movie, and assessment results are merely photographs. Your level of extroversion and introversion varies within a range of values, depending on your internal and external contexts at any given time. If you’ve ever taken a forced-choice personality assessment such as the MBTI, and thought to yourself in response to the questions, “well, that depends,” you’re likely an ambivert.

Let’s give ambiversion the recognition it deserves! After all, it’s what most of us are, anyway.