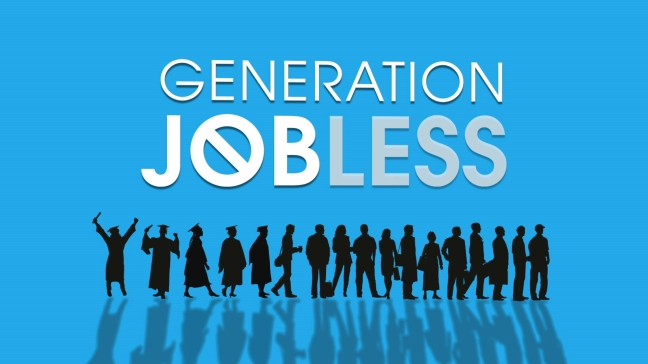 A little more than two years ago, I wrote a post titled “Academia vs. Students: Disconnected.” The post felt a little bit controversial as I voiced some criticisms of the state of higher education (and it’s no secret to readers of this blog that I’m employed at a university), though it seemed to be received pretty well. The main thrust of the article can be summed up in the following excerpt:

We have a perception that universities exist to prepare us for our careers, and a reality that is somewhat different: Higher education is still as much about learning for learning’s sake as anything else.  The result?  Students feel like they were owed something that they didn’t get.  After so much work just to finish a degree in the first place, they don’t know how to translate the skills they crafted over years of academic exertion into a paycheck….

There’s a lot of work to be done in transforming academia into something that effectively balances the need to pursue knowledge and build general skills with the need to effectively train generations of happy and productive workers. I sure don’t know what needs to be done, or if there is even an ultimate solution, but there are sharper minds than mine out there to address that issue.

Two years later, this disconnect has arguably gotten worse, not better. In posts elsewhere, I’ve been pretty vocal about my feelings on the positive value of higher education (such as this piece for Career Options Magazine on the “value” of certain majors over others). Still, I have to admit that when it comes to higher education as a whole, I remain conflicted. I don’t really know what to think. There’s a heavyweight brawl of a debate going on right now as to the value and responsibility of post-secondary education in Canada, with solid blows being struck by either side.

In This Corner, The Challenger: Change

Weighing in at a lean 81 kg, the change is a relative newcomer to the circuit, but its meteoric rise to popularity has been well-documented and it’s certainly not without supporters, who tend to be quite outspoken. Very recently, change was given a huge popularity boost in the wake of a CBC documentary entitled Generation Jobless (viewable at the link in Canada). The documentary is the third in a series of episodes by Dreamfilm Productions focusing on generation Y (the first two: Hyper Parents & Coddled Kids and Generation Boomerang). Generation Jobless is an exposé of sorts on Canadian youth unemployment, which is a staggering 14% – double that of the general population (without taking into account the issue of underemployment). According to the documentary, the crisis is only going to worsen:

The key players in Canada –universities, employers and governments – are not working together to find a solution.  Canada is the only country in the world without a national body responsible for  education and is seen as one of the most decentralized and fragmented countries in the world when it comes to helping young people make a smooth entry into the world of work.

The knock against universities is that they’re graduating too many students from areas of study that don’t fit the demands of the labour market – which is ironically facing shortages in many areas, technological sectors being a good example. One area that gets a special condemnation in Generation Jobless is teacher education programs, as in some parts of the country there are barely enough job openings for a third of graduates with teaching credentials. It begs the question: why then are universities continuing to accept, and indeed expand, enrolment levels in these programs if there are no viable jobs after graduation?

Proponents of change will also point to the fact that universities are businesses, and as such their ultimate bottom line is not the employability of graduates, but the money that will allow the university to operate, grow, and remain competitive with competing institutions for students’ tuition. Meanwhile, a university education is the least affordable it has ever been (see post: “Paying For University: How Far Will You Go?“), and tuition costs are showing no sign of decreasing. The majority of students graduating from university do so with student loan debt, the average of which is $27,000.

Something has to change, right? Whether it’s the necessity of university education itself, or the structure of that education. This is the question proponents of change are asking.

And In This Corner, The Heavyweight Champion: Status Quo

Weighing in at a comfortable 91 kg, status quo has had a virtually unchallenged hold on the championship since it appeared on the scene so long ago. Mired in tradition, steeped in antiquity, higher education’s status quo has championed the relentless pursuit of advanced knowledge, the promotion of critical thought, and the production of the finest thinkers the world has known. Whatever is said about the labour market value of a university degree, the knowledge and personal development value of higher education is, has been, and will remain to be – to my knowledge – relatively unquestioned.

Some would argue that job preparation has now become a major responsibility of universities as well, there are convincing arguments that universities are doing just that. SFU’s own president, Andrew Petter, has gone on record numerous times (examples: here, here, here) to defend the value of a university education, and the fact that labour shortages in the near future will require university educated workers. Additionally, in a response to Generation Jobless, Leo Charbonneau – writer of the popular Margin Notes blog at universityaffairs.ca – wrote an article outlining some data that suggests university graduates these days are doing better than what the chatter generated by the aforementioned documentary would suggest. Among the data he cites, largely from labour market surveys (check his article for the sources):

On a provincial level, the Research Universities Council of British Columbia (RUCBC) has also posted a Labour Market Profile that points out that by 2016, BC will be facing a severe shortage of university-educated workers. Among the report’s data (pdf) is the following chart, which illustrates the projected shortage nicely. 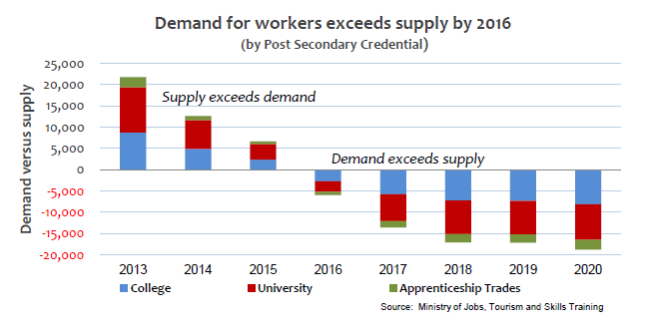 So, according to this line of thinking, universities appear to be holding up their end of the bargain. Status quo proponents seem to be asking, “why change a system when it continues to produce positive results?”

I’ve been trying to wrap my head around this issue for a while, and sometimes I get close to feeling like I’ve got my position sorted out. But then something like Generation Jobless, and the debates it’s spurred, comes along and suddenly I’m re-evaluating my relative certainty. My being employed at a university complicates things further, as I surely have a fairly biased perspective as a result.

To be sure, universities are still doing what they do well, and that is the production of graduates with a breadth of knowledge as well as important longer-term life skills like problem solving, critical thinking, and communication to name but a few. Unfortunately, I’m also quite sure that there exists a vocal group of students and graduates who are honestly struggling after navigating a post-secondary system they were led to believe would take care of them.

So, there has to be a middle ground. Extremists advocating for the wholesale dismantling of the post-secondary system likely aren’t taking into account the massive labour market changes we’re about to go through, and the devastating effect that not having a properly functioning higher education system would have on economies all over the world. Still, improvement should always be strived for, and allowing labour market trends to influence policy in higher education is not the worst idea in the world. So we’re left with the question, how to improve?

There are those who would argue simply to stream more students into “practical majors” like hard sciences, business, engineering, computer science, and so on, thus discouraging studies in the arts. I won’t spend time on explaining why here, but I believe that’s a terrible idea. So what are we to do?

The thing is, we already know what works. Having seen time and time again the stark differences between those students who are able to transition seamlessly into the workforce after graduation and those that have difficulty, I have all the anecdotal evidence in the world for what changes can be made in universities to facilitate the career success of graduates (don’t worry, there’s real evidence too).

Here’s my vision: Imagine a world where high school students actually found their career planning class enjoyable and useful. Imagine those classes were taught by qualified, motivated, and passionate career development professionals, instead of the less-qualified beginner teachers on the bottom of the educational totem-pole, desperate to teach a class, any class, to gain some much-needed seniority. Imagine every student in every university also took mandated career education courses in their first year, also taught by qualified career development professionals, so they knew exactly what to expect (and maybe more importantly, what not to expect) from their academic pursuits.

Still with me? Now imagine that all of those students were required to complete – as a requisite part of their degree – multiple forms of experiential education. This could involve co-operative education, industry mentorship programs, project-based learning, volunteering, and the list goes on. These students would receive support from vital student services on campus (who are already running these programs, albeit on stretched resources) that would be integrated into institutional goals (is student success not a goal of most universities?). This would include at least one fully paid internship for every student, helping to offset a bit of the financial pressure of tuition, living expenses, and student loan debt.

The result? Better prepared graduates, more partnerships with industry, and the activation of a portion of the labour market that is at present under-utilized (current students).

Maybe it’s a pipe dream. I realize there’s a thousand questions related to the issue of how this gets implemented that I couldn’t possibly answer. But it has to start somewhere.